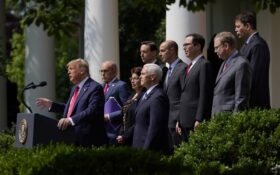 A Georgia man and a California woman have been sentenced to prison for fraudulently obtaining coronavirus relief funds through a program designed to help small businesses across the nation stay afloat.

Dennes Garcia, 28, of Atlanta, was sentenced Wednesday to 18 months in federal prison after pleading guilty July 6 in the Southern District of Florida to conspiracy to commit wire fraud, according to a news release from the U.S. Attorney’s Office.

Prosecutors said Garcia obtained the Paycheck Protection Program money for his company, Dhanda Corporation, based on false information about the company’s payroll and the number of employees, court documents said.

Cindi Denton, 63, of Eastvale, California, was sentenced Oct. 8 to six months in prison and 12 months of home confinement after pleading guilty July 22 in Florida’s southern district to conspiracy to commit wire fraud, the release said.

Denton admitted to obtaining a PPP loan of $491,310 for her own company, Emerald Jade Solutions Inc., based on false information about the company’s number of employees and average payroll, and based on false supporting tax documents, the release said.

Both Denton and Garcia said they paid alleged co-conspirator James Stote as a kickback for his assistance in preparing and submitting the fraudulent loan application, the release said. He was charged by complaint with wire fraud, bank fraud, and conspiracy to commit wire fraud in June 2020 and his case is pending, the release said.

It wasn’t immediately known whether Stote has a lawyer who could speak on his behalf.