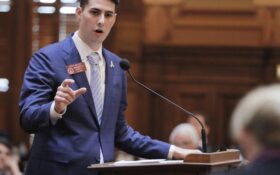 A Georgia state lawmaker indicted on a misdemeanor charge related to a 2019 fatal hit-and-run-crash is stepping down from his leadership post, but remaining in the state House.

Republican state Rep. Trey Kelley, who as majority whip had been the fourth-ranking member among House Republicans, announced that he was giving up the leadership post in a Thursday email to fellow House GOP members.

“I knew when I accepted this role it wouldn’t be forever and now is the time for me to dedicate more time and energy to my professional and personal life,” Kelley wrote in an email. “I feel that it is necessary for me to step down today from my role as majority whip.”

Kelley, a Cedartown resident and lawyer, represents all of Polk and parts of Floyd and Haralson counties in northwest Georgia. He was indicted in December on a charge of reckless conduct, alleging he wrongly didn’t report a fatal 2019 hit-and-run crash that his friend called him about as the victim lay dying in a ditch.

Kelley’s wife of 13 years also filed for divorce in May.

Kaleb McMichen, a spokesperson for Republican House Speaker David Ralston of Blue Ridge, said the majority Republican caucus is required by its rules to elect a successor. McMichen said no date for the election has been set, but that it could come this summer

Ralph “Ryan” Dover III, the man accused of calling Kelley instead of 911 after fatally hitting bicyclist Eric Keais, was indicted on charges of felony hit-and-run and reckless conduct.

Kelley has denied doing anything wrong and asked a judge to throw out the indictment. His attorney, Lester Tate, said Tuesday that the judge has yet to rule on the motion to quash.

Officials have said Dover hit Keais while driving his SUV on North Main Street in Cedartown on the night of Sept. 11, 2019. Instead of calling 911, Dover drove elsewhere and called Kelley, who in turn called Cedartown Police Chief Jamie Newsome at home, according to authorities. An officer was sent to the area, unaware that someone may have been injured, and eventually found Keais lying in a ditch, gravely wounded. Keais died from his injuries soon afterward.

Kelley told police that night he wasn’t sure whether Dover hit a person or a deer. He says he cooperated with police and denies wrongdoing.