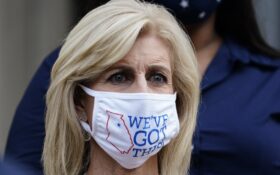 Election officials in Georgia’s 159 counties are undertaking a hand tally of the presidential race that stems from an audit required by state law.

The law requires that one race be audited by hand to check that the machines counted the ballots accurately, not because of any suspected problems with the results. Secretary of State Brad Raffensperger chose to audit the presidential race and said the tight margin — Democrat Joe Biden leads Republican President Donald Trump by 14,000 votes — means a full hand count is necessary.

Even as the counties were required to begin the count by 9 a.m. Friday, Raffensperger was self-quarantining as a precaution after his wife tested positive on Thursday for the coronavirus. The secretary of state’s office has instructed county election officials to complete the audit by 11:59 p.m. Wednesday. The deadline for the state to certify the results is Nov. 20.

The deputy secretary of state, Jordan Fuchs, told The Associated Press that Brad Raffensperger tested negative for the virus, adding that the secretary’s quarantine will not affect the audit.

The audit is a new requirement that was included in a 2019 law that also provided guidelines that the state used to purchase a new election system from Dominion Voting Systems for more than $100 million.

County election staffers will work with the paper ballots in batches, dividing them into piles for each candidate. Then they will count each pile by hand, Fuchs said.

The final numbers in the audit count will almost definitely be slightly different than the numbers previously reported by the counties but the overall outcome should remain the same, said Gabriel Sterling, who oversaw the implementation of the state’s new voting system for the secretary of state’s office. The results will not be released piecemeal as the counties finish counting but instead will be announced once the full tally is complete, he said, adding that the results of the new count from the audit is what will be certified.

There is no mandatory recount law in Georgia, but state law provides that option to a trailing candidate if the margin is less than 0.5 percentage points. Biden’s lead stood at 0.28 percentage points as of Thursday afternoon.

Once the results from the audit are certified, the losing campaign can request that recount, which will be done using scanners that read and tally the votes, Raffensperger said.