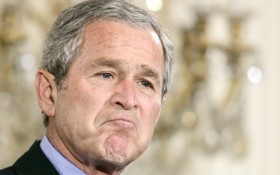 Former President George W. Bush just proved he is part of the elite establishment in Washington that doesn’t know how to handle the shake-up that President Donald Trump has facilitated in his efforts to “drain the swamp.”

Throughout former President Barack Obama’s presidency, his predecessor was silent.

Bush promised that, in the spirit of democracy and peaceful transfer of power, he would not publicize his personal opinions about Obama’s actions as president.

It would be assumed that he would extend that same respect to the next president, especially considering the political party they have in common, but instead Bush spit in the face of Trump.

In an interview with National Public Radio last week, Bush gave his opinions of the current state of the nation, and they completely contradict most of Trump’s actions.

While Bush didn’t utter Trump’s name, he clearly challenged his policies on refugees.

“When you have an entire generation of people being wiped out and the free world turns its back, it provides a convenient opportunity for people to spread extremism. I believe in this case that it’s in our national security interests as well as in out moral interest to continue fighting this program.”

He also made an obvious jab to Trump on immigration, saying, “There needs to be a way for somebody to be able to get in line to become a citizen so long as they met certain criteria.”

And it gets even worse.

Bush then all but called Trump a liar, when he said, “The border, the idea of building a wall, I mean, I built a wall… But it’s not going to be a brick wall all the way across Texas. A lot of times in politics, the rhetoric is different from reality.”

Coming from a man who has not occupied office in over eight years, it could be argued that Bush is the one who is out of touch.