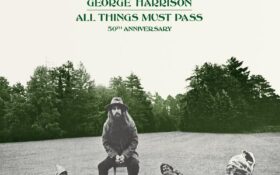 George Harrison’s landmark album “All Things Must Pass” is celebrating its belated 50th anniversary and the former Beatles’ son thinks a new remixed collection might make the perfect post-pandemic soundtrack.

“I think that the message of this record is more ready to be received now than it was when it first came out,” said Dhani Harrison. “The message is clearer and now it’s sonically clearer. This is a really important bit of music.”

The original collection was audacious for its time — the first triple studio album in rock history, a virtual flurry of vinyl.

The anniversary editions out this week make that look quaint, containing eight LPs (or five CDs) plus a Blu-ray audio disc, with the remixed album, demos, outtakes and jams.

There are reprinted archival notes, track annotations, photos and memorabilia. The most expensive edition comes in its own wooden crate, complete with figurines of the famous garden gnomes featured on the album cover. But first is the music, which Rolling Stone lists among the 500 greatest albums of all time.

“We’re not trying to make it sound modern,” said triple Grammy Award-winning engineer Paul Hicks. “I’m not trying to put any sort of stamp on it. We are very respectful to the mixes that were there and follow them as much as possible.”

The skeleton of “All Things Must Pass” was recorded over two days in late May 1970. On May 26, Harrison record 15 songs backed by Ringo Starr and his longtime friend, bassist Klaus Voormann. The next day, he played an additional 15 songs for co-producer Phil Spector on just an acoustic guitar.

The original 23-track album — complete with hits “Isn’t It a Pity,” “What Is Life” and “My Sweet Lord” — has been remixed for the anniversary editions from Capitol/UMe and are now augmented with 47 demos and outtakes, 42 of them previously unreleased.

Dhani Harrison and Hicks started work on the anniversary editions five years ago, re-digitizing and listening to every song and every take made during the sessions. It was an ever deeper dive than the 30th and 40th anniversary reissues. Hicks calls the new work “forensic.”

They emerged from the vault with some 110 different songs and Harrison and his team had to decide how to present what he’d found. He recalled once listening to a Beach Boys box set that had 10 versions of every song and didn’t want to go that route.

Instead, he wanted to bring the listener into the recording process to hear how the songs had evolved. “What we were looking for was the ones that really stood out and that really screamed something new,” said Harrison.

Listeners familiar with the album track “Let It Down” — a dynamic tune that got the Spector Wall of Sound treatment and resembles a James Bond theme — may be stunned to hear the stripped down, heartfelt acoustic demo version Harrison recorded on Day 2.

There’s a slowed-down version of “Isn’t It a Pity” that’s even sadder than the album version, and a sublime version of “Art of Dying” that’s arguably better than the final. Some songs got sped up and some got slower during the process, potentially blowing the mind of anyone who thought the final versions were somehow the only way to play them.

“Once you hear it, you can’t unhear it. It does change the way you hear the whole record forever. But it doesn’t ruin the experience of knowing the record,” said Harrison.

A very human George Harrison can also be heard in the mix. He’s captured asking for orange juice — while playing a very cool version of “Get Back.” His “Going Down to Golders Green” is Harrison doing his very best Elvis impression, a real treat. There’s also Harrison’s recording of “It’s Johnny’s Birthday,” a gift to mark John Lennon’s 30th birthday.

The demos reveal the origin of a very rootsy “Woman Don’t You Cry For Me,” which would become the opening track of his 1976 album, “Thirty Three & 1/3.” And during the 14th take of “Isn’t It a Pity,” a fed-up artist goes off-script to instead sing: “Isn’t it a pain/Why we do so many takes?”

Harrison and Hicks have dubbed Disc 5, which contains session outtakes and jams, the “party disc.” “We wanted to show that the guys were having fun,” said Hicks. “It’s emotionally a very heavy album. It touches on a lot of deep subjects. So we really wanted to show a lighter side to some of the content.”

Harrison collected quite a roster of musicians to help him on “All Things Must Pass,” including Eric Clapton, Bob Dylan, Ringo Starr, Billy Preston, Delaney and Bonnie Bramlett, Pete Drake and even a young Phil Collins (whose bongo work never made the album).

“It was a pretty mean squad of people that he recruited, you know what I mean? Like, he wasn’t messing around with this record,” said Harrison.

The younger Harrison also investigated stories behind the songs, like the album opener, “I’d Have You Any Time.” He learned that Clapton struggled at times to play Harrison’s notes. “It was incredible to hear Eric say how hard it was because that’s a guy that doesn’t find playing guitar very hard.”

The “All Things Must Pass” recording sessions began just six weeks after the April 1970 announcement of The Beatles’ break-up and the younger Harrison notes that his father was going through a lot during that time: In addition to the band’s break-up, he lost his mother and he was also leaving a lover.

“It’s a family time capsule and there’s so much love in it,” said Dhani Harrison. “He was brave to do this when he did it. It’s lightning in a bottle. I don’t think that those conditions come around maybe once in a lifetime for an artist.”