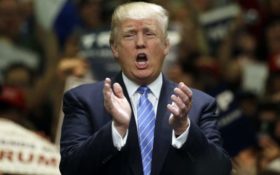 If you’re trying to drain the swamp, wouldn’t it be nice if the snakes and alligators were using buckets too?

President Donald Trump has promised to get rid of unfair, anti-business regulations — and his latest executive order is being cheered by supporters as an elegant solution to a complicated problem.

If an agency wants a new rule or regulation, they have to get rid of two in it’s place.

Easy, but effective. The brilliance of the plan is in it’s simplicity.

Who knows which regulations are better for their agency (and which are unnecessary or redundant) than the people working in those government agencies, after all?

“We’ll be reducing [regulations] bigly, and their damaging effects on our small businesses, our economy, our entrepreneurial spirit. The American dream is back,” Trump told reporters at the signing.

“After signing the order, Trump met with some of America’s small business leaders at the White House. The new act also slashes the regulatory budget to $0 for fiscal year 2017,” Fox News reported.