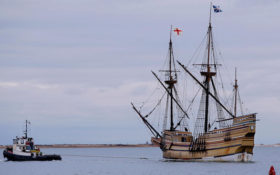 A months-long effort to digitize the authenticated genealogies of Mayflower passengers has been completed, making it easier for people to determine if they are descended from a Pilgrim.

The New England Historic Genealogical Society announced Wednesday that the Pilgrim database project launched last year with the cooperation of the General Society of Mayflower Descendants includes 193,000 birth, baptism, marriage, deeds, death, and burial records of 50 of the 51 Pilgrims known to have descendants.

Interest in Pilgrim genealogy is surging with the 400th anniversary of the Mayflower’s arrival in the New World in 1620 fast approaching. There are an estimated 10 million living Americans and as many as 35 million people worldwide descended from the Pilgrims.

The records are available at the genealogical society’s website, americanancestors.org for a membership fee.