Gen. Mattis: I won't let China get away with this - The Horn News 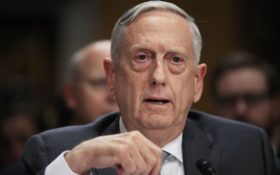 The U.S. will continue to confront China’s militarization of manmade islands in the South China Sea, Defense Secretary Jim Mattis said Tuesday, arguing that Beijing hasn’t abided by its promise not to put weapons on the Spratly Islands.

Mattis said American ships are maintaining a “steady drumbeat” of naval operations around the disputed islands, adding that “only one country” seems to be bothered by the vessels’ routine activities.

The United States has long been critical of China’s sweeping sovereignty claims in the South China Sea, disputed by several neighboring governments. On Sunday, two U.S. warships sailed close to the Paracel Islands, which lie north of the Spratlys, the latest freedom of navigation operation designed to challenge Beijing’s claims. China protested the maneuver.

But the latest spat comes amid unusual tension between the U.S. and China on trade and as President Donald Trump eyes a summit with North Korean leader Kim Jong Un to discuss Pyongyang’s nuclear program.

China is North Korea’s traditional ally and is wary of any shift in the balance of power on the Korean Peninsula. After North Korea threatened to withdraw from the summit last week, Trump attributed the “change in attitude” to the influence of Chinese President Xi Jinping, who recently met with Kim. However, by Tuesday the summit appeared back on track again, with Kim dispatching a top aide for talks with Secretary of State Mike Pompeo in New York.

According to the U.S., the freedom of navigation missions are meant to underscore the rights of the U.S. and others to operate in international waters and airspace and to block efforts by any nation to unlawfully extend their boundaries or territorial rights. But Washington has signaled its displeasure in other ways, last week withdrawing an invitation for Beijing to participate in a large, multinational naval exercise in the Pacific later this summer. China had participated in the exercise known as Rim of the Pacific in 2014 and 2016.

The Pentagon said the decision to disinvite the Chinese Navy was triggered by what it called strong evidence that China has deployed anti-ship missiles, surface-to-air missile systems and electronic jammers to contested areas in the Spratly Islands. It called on China to remove the systems.

China says it is within its rights to build up defenses on islands in the South China Sea that it believes are its sovereign territory.

Mattis said other nations in the region are concerned about the weaponization of the islands and reefs, and they want to see continued freedom of navigation operations in the international waters.

“If you notice, there’s only one country that seems to take active steps to rebuff them or state their resentment of them,” Mattis said, referring to China.

In recent years, the U.S. had sought to stabilize military relations with China, but the militarization of the islands has been a persistent point of conflict. Many nations fear that Beijing will use the construction on the islands to extend its military reach and potentially try to restrict navigation in the South China Sea.

Mattis is stopping in Hawaii on his way to the Singapore meeting so that he can attend the ceremony marking the change in leadership at U.S. Pacific Command.

U.S. Navy Adm. Philip Davidson will take over PACOM from Adm. Harry Harris during the change of command on Wednesday.

Harris has been nominated to become the next U.S. ambassador to South Korea.