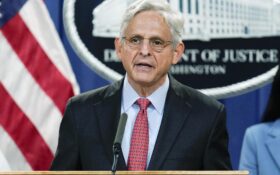 Attorney General Merrick Garland named a special counsel on Friday to oversee the Justice Department’s investigation into the presence of classified documents at former President Donald Trump’s Florida estate as well as key aspects of a separate probe involving the riot at the Capitol on Jan. 6.

The move, which is being announced just three days after Trump announced his 2024 candidacy, is a recognition of the unmistakable political implications of two investigations that involve not only a former president… but also a current candidate for president.

Though the appointment installs a new supervisor atop the probes — both of which are expected to accelerate now that the midterm elections are complete — the special counsel will still report to Garland, who has ultimate say of whether to bring charges.

A senior Justice Department official disclosed the appointment on Friday but did not reveal the identity of the special counsel. Garland was expected to provide more details later in the afternoon.

In the U.S., the attorney general can appoint a special counsel to investigate a case involving a conflict of interest for the usual investigator.

Robert Mueller served as the most recent special counsel for the Justice Department. Between 2017 and 2019, Mueller received outsize attention for investigating Russian interference in the 2016 elections, possible links between Russian officials and Trump’s employees and Trump’s potential obstruction of justice.

Mueller’s office wrote that it “does not exonerate” Trump of obstruction, but the Mueller report ultimately “does not conclude that Trump committed a crime.”