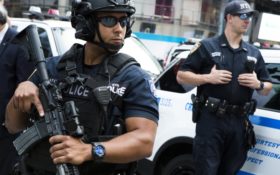 Ever since George Floyd’s death, calls have grown to defund the police.

Now it seems there could something far more sinister brewing.

The Chicago Police Department (CPD) confirmed that it was notified of a bombshell threat from the FBI. Federal agents say a “gang cabal” could be actively targeting police officers in the streets for assassination.

QUIZ: Which 1 Out Of THESE 3 Alcoholic Drinks Should You Drink? [sponsored

“Shoot on-sight any cop that has a weapon drawn on any subject in public,” ABC7 reports.

Shoot on site — and post the video of the murder online.

The investigative team got its hands on a “situational information report” from the FBI detailing the horrifying warning about the gang treaty, which read:

” … members of these gang factions have been actively searching for, and filming, police officers in performance of their official duties. The purpose of which is to catch on film an officer drawing his/her weapon on any subject and the subsequent ‘shoot on-sight’ of said officer, in order to garner national media attention.”

Though the alert is putting Chicago area officers on guard, the jury is still out on whether or not the claims are valid. Information about the alleged activity, according to the FBI, could be coming from “a contact whose reporting is limited and whose reliability cannot be determined.”

But that doesn’t mean that there hasn’t been an uptick in violence against police officers — just ask Chicago area cops. They’ve noticed the spike in the number of both cop fatalities and wounded cops.

ABC News says that police officer killings have risen 28 percent, due in large part to many saboteurs attempting to take advantage of the unrest.

CPD Superintendent David Brown said, “I think 51 officers being shot at or shot in one year, I think that quadruples any previous year in Chicago’s history. So I think it’s more than a suggestion that people are seeking to do harm to cops.”

The FBI report’s release comes at a time when many departments across the country are struggling — fighting against politics and protests — to restore order in the cities.