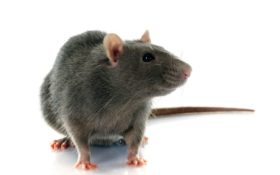 Residents of a remote Bering Sea island are celebrating the death of an intruder that had eluded capture for 10 months — a Norway rat.

St. Paul Island is internationally known breeding habitat for millions of seabirds, including rare migratory species, the Anchorage Daily News reported . Seabirds lay eggs on rocks and songbirds lay them in tundra nests. Both are vulnerable to an infestation of voracious rats.

Biologists experienced a moment of “terror” when a Norway rat was spotted last fall in St. Paul’s fish processing plant, said Heather Renner, supervisory wildlife biologist with the Alaska Maritime National Wildlife Refuge. At worst, it would be a pregnant rat.

″(St. Paul and neighboring St. George Island) are two of the last communities where there’s actually a port and vibrant community and there are not rats,” she said. “They are home to a tremendous wildlife resource.”

St. Paul is the largest of the four Pribilof Islands. It’s about 240 miles (385 kilometers) north of the Aleutian Islands and 750 miles (1,200 kilometers) west of Anchorage.

“Rats have such a potential to invade and change the ecosystem in a way we’d never recover from,” Divine said.

For decades, the tribal government and state and federal agencies have worked together to keep rats off the island. At least eight rats have been caught by a “security detection program” involving traps at the harbor, Renner said.

After the rat was seen in the fish processing plant, wildlife officials mounted an aggressive response. A “strike team” deployed baited rat traps and set up wildlife cameras to track the rat’s movements.

A winter of near misses followed. A live trap captured the rat but it escaped.

“It has been a wily rat,” Renner said. “Really frustrating.”

Searchers hoped to avoid using rodenticide but finally decided it was necessary. A person had to be specially trained to safely apply it, Renner said.

On Sunday, just as kittiwake chicks were hatching and bird tourism was nearing its summer peak, a visiting birder discovered the rat dead.

“If you have one rat, you have to assume there are more,” she said.

“If after a few weeks or months we have no further detection we’ll feel more comfortable saying they are gone,” Renner said.