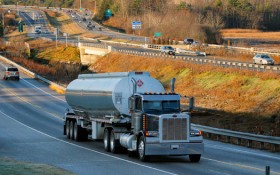 A big-rig truck driver has been arrested after authorities spotted a phony license plate on his rig.

How could they tell?

Well, the Ventura County Sheriff’s Department says the 1960s-style yellow-on-black plate had wobbly letters and numbers. Also, instead of “CALIFORNIA,” it read “CALIFAS.”

The department said Monday that a motorcycle officer spotted the plate and pulled the driver over in the city of Moorpark, northwest of Los Angeles.

The driver was arrested on suspicion of driving under the influence of drugs, possessing methamphetamine, being an unlicensed driver and having an active arrest warrant.

The tractor-trailer was towed away because authorities say it was unsafe.