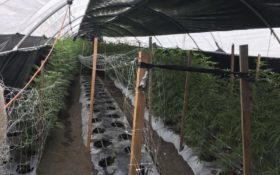 A man confused about Ohio drug laws has called a police department demanding that officers return the small amount of marijuana they “stole” from him.

WXIX-TV reports the man told a Sharonville police dispatcher in an expletive-laced call Tuesday that it’s legal to possess 100 grams (3.5 ounces) of marijuana, and the amount officers seized was just 4 grams (0.14 ounces).

Sharonville police posted a recording of the call on their Facebook page. The suburban Cincinnati department wryly noted: “People may be a bit in the weeds, so we would like to take this opportunity to clear the haze.”

While some Ohio cities have decriminalized pot possession, it remains illegal in the state.

Sharonville police said they “don’t make the rules” but must uphold them.