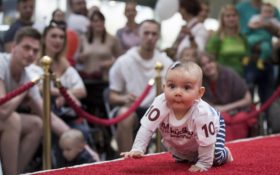 In Lithuania, the rat race of life apparently starts early.

Twenty-five babies have taken to the red carpet in Lithuania in a crawling race as their parents, grandparents and onlookers cheered the spectacle.

Saturday’s event in Vilnius, the capital of Lithuania, was the 20th annual event staged by a local radio station to mark International Children’s Day, celebrated in this Baltic nation on June 1.

Teams waved toys and even banged baby food cans to spur the 7-to-11-month-old baby girls and boys to move faster on the carpet.

An 11-month-old baby boy named Ignas managed to crawl over a few meters (yards) and reach the finish line first.