Fun-loving Santas tear up the ski slopes (See the pics!) - The Horn News 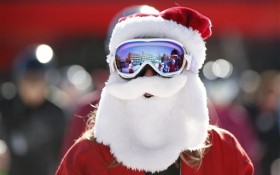 Santa and his helpers hit the ski slopes to spread some holiday cheer on Sunday.

All told, a mob of 150 right jolly ol’ elves hopped on skis and snowboards for the 16th annual Skiing Santas event at Sunday River ski resort in Maine.

The event serves as a festive kickoff to the holiday season.

“It’s really fun because everyone is a little wild and crazy,” said Catherine Bolender, 53, of Waterboro, who’s been participating for about a dozen years. “It’s a fun, festive event.”

Thom Bureau, a snowboarder, agreed that it’s chaotic — and unforgettable.

“When you’re on the chairlift, you look back as you’re getting off, and the whole chairlift is full of Santas. It’s kind of freaky, actually,” he said.

The event has become so popular that it’s difficult to get a ticket.

Brad and Heather Cope of Newton Falls, Ohio, said the online registration filled up in 4 minutes on Nov. 30. They said they were lucky to make the cut.

“We were both on our computers at noon to make sure we got it,” said Brad Cope, a former ski instructor who installs swimming pools. Heather is a Maine native and nurse practitioner.

Resort officials say the event raised a little more than $3,000 for the Sunday River Community Fund, a local charity.

Participants were required to donate at least $15 to the fund. In exchange, they were allowed to ski for free and to receive another lift ticket good through Dec. 18. 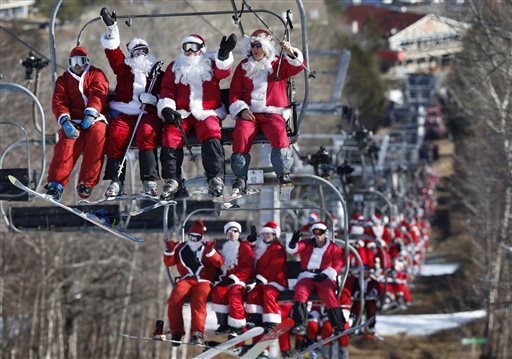 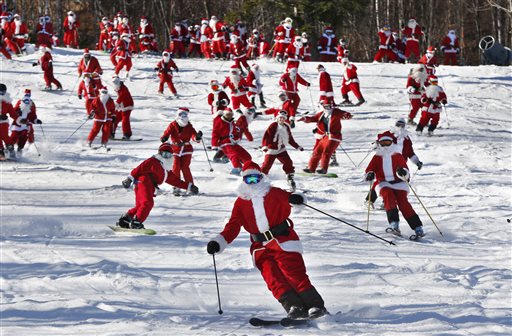 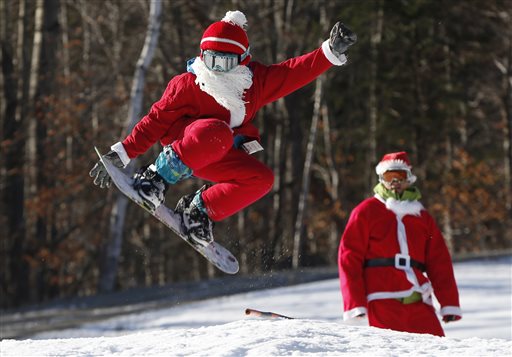