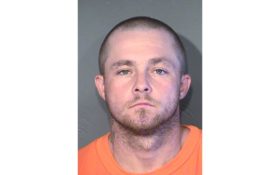 Authorities are searching for an inmate who escaped from a state prison in Tucson.

The Arizona Department of Corrections say Purdon was last accounted for at 7:40 p.m. Sunday.

Searchers and tracking dogs are trying to locate Purdon.

Purdon was serving more than four years in prison for his March 2016 guilty plea to solicitation to possess a dangerous drug for sale.