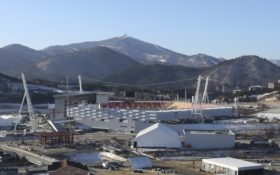 The cold is back for the Winter Games.

After two straight balmy Olympics where some might have wondered if it was even winter, let alone the world’s pre-eminent freeze-dependent sporting event, athletes and visitors alike will finally experience a serious chill in their bones during the games in mountainous Pyeongchang.

How cold is it?

So cold that tears spring to the eyes. So cold the ink in a pen grows sluggish and fades as it scribbles over a page. So cold that South Korean men sometimes flash back to being posted for hours on the frozen frontline during mandatory military service. So cold at least six people were treated for hypothermia last month after a pop concert at the open-air Olympic Stadium.

“We all hope it will be better in February, but if it’s like it is now, there will be big trouble. It’s just too cold for outsiders,” says Choi Jong-sik, 64, smirking in his short-sleeve shirt as a visiting reporter removes layer after layer of thick outerwear for an interview at Choi’s Pyeongchang restaurant.

Vancouver and Sochi, where ski jumpers were landing in puddles, got complaints for being too warm, as might Beijing in 2022, but the weather in Pyeongchang will likely dazzle spectators, and confound organizers and athletes, in its bitterness.

Pyeongchang sits nearly half a mile above sea level in the northeastern corner of South Korea, not too far from the border with the North. It is one of the coldest parts of the country — wind chill in February is often in single digits (Fahrenheit) — and notorious for a powerful, biting wind that gathers force as it barrels down out of Siberia and the Manchurian Plain and then across the jagged granite peaks of North Korea.

It can be hard to get people here to talk about, or even acknowledge, the cold. It is simply a fact of life, and stoicism is often the rule when confronted with outsiders’ weather-related questions.

“The only thing foreigners can do is the same thing locals do: bundle up,” Nam Sun-woo, 60, a fishmonger in Pyeongchang, says. “Not many outsiders understand how cold it gets here. It’s not like where they’re from. This kind of cold is completely different.”

The weather will be on display, and maybe a major nuisance, at the Pyeongchang Olympic Stadium in Hoenggye village. The much-criticized 35,000-seat open-air pentagon-shaped arena, which cost 118.4 billion won ($107 million), will be used only four times — during the opening and closing ceremonies of the Olympics and Paralympics — and then torn down.

On a recent blustery day, from the top of a nearby 17-story building, the white angular stadium looks a little like a giant discarded Lego piece. It rises isolated on a wide, flat plain, muscular mountains cascading down behind it. It looks vulnerable and exposed — all those thousands of orange and pink seats laid bare below the wide dome of sky — but also slightly magical as the sun glitters off millions of tiny ice flakes blowing across the plain.

The wind is brutal, and it pounds the entire area, including the stadium and the rooftop, where the gusts rattling through the big AC units sound like a doomed bomber plummeting out of the sky in an old war movie.

Despite the cold, organizers have done little to protect stadium visitors. Spectators will have to sit exposed for as long as five hours in the elements during the nighttime ceremonies. There are no built-in heating systems for the seats and the corridors, and it’s too late to build a roof and too expensive to install central heat, officials say.

Many of the concertgoers last month where six were treated for hypothermia reportedly flocked to the arena’s toilets for a rare bit of respite from the cold.

Organizers plan to provide each spectator at the Olympics ceremonies with a raincoat, a small blanket and heating pads — one to sit on, one for the hands and a pair for the feet. They also plan to install polycarbonate walls above the highest seats across the two northwest sides of the stadium to block the strongest winds. About 40 portable gas heaters will be placed in aisles between the rows of plastic seats, and lots of hot coffee and tea, fish sticks and heated buns will be on sale.

When Associated Press journalists visited the area earlier this month, it was minus 18 degrees C (a little below zero F) midmorning at a resort near Olympic Stadium.

The coastal areas of Gangneung, where skating and hockey will be held, are warmer than Pyeongchang. But it’s still cold. Tourists can be seen in thick quilted coats standing on piers and posing for pictures as huge, frigid blue-green waves crash behind them; they run and laugh, trying to dodge the spray.

Locals often smirk when they see bundled up tourists waddle around Pyeongchang like penguins. Choi, after an interview, stands outside his restaurant, still in his short-sleeve shirt, smoking a cigarette while a well-layered-up reporter shivers nearby. “Sometimes I go out like this and the people in warm coats look at me like I’m crazy.”

A drive into the mountains twists through isolated former mining towns and past frozen fields, frozen rivers, frozen forests and dramatic granite peaks that look in places like they’re sliding into the valleys. The sun sparkles on the brittle ice covering the landscape; the wind roars through the pine trees like traffic on the interstate.

“It’s cold, and it’s going to get colder. But what can we do?” says Ahn Young Ju, 36, a restaurant owner in the remote town of Nammyeon in Jeongseon county, which will host the downhill skiing events. “We were born here, so we try not to think too much about it.”