Franklin Graham thanks God for... (this has us shouting, "AMEN!") - The Horn News 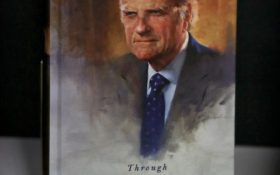 Before the 2016 elections, Billy Graham’s son went to his father’s home to seek advice before a 50-state tour to pray with Christian voters.

In his new book, “Through My Father’s Eyes,” Franklin Graham recounts that his father had concerns.

Billy Graham had become known as “America’s Pastor” by advising presidents of both parties, from Dwight Eisenhower to George W. Bush. Would his son, coming into his own as a more partisan evangelical, be taking sides?

Frankling would soon shock everyone by declaring his admiration for President Donald Trump.

“He was concerned because it was a political year and that, ‘Franklin you don’t want this to be seen as political,’” the son said in an interview. “And that’s why I went out of my way to make sure that this was a prayer rally … and I made sure I did not tell anyone how to vote.”

The younger Graham pointedly avoided endorsing Trump, but neither did he abandon him as other religious leaders did in response to scandals that surfaced during the campaign. He has since become an outspoken Trump ally, and writes in the book that he thanks God the Republican was elected.

As the leader of his father’s namesake association and the Samaritan’s Purse charity, Graham has been more in the spotlight since his father’s death in February at age 99. It’s a sensitive time for American Christians: While some evangelicals support Republicans without question, others struggle to find support in the Bible for what Trump says and does.

Graham acknowledges both conservative Christians and a wider audience in his book, which intersperses his views on religion, culture and Trump with quotes from his father and family anecdotes.

“I started by just looking at the things that I have learned from my father that I thought I could pass on to others, that would help them in their lives,” Graham explained in an interview.

Each chapter starts with a Billy Graham quote, and there are poignant stories about their relationship, from the father’s admonishment against playing with matches, to his advice to a son committing his life to Jesus at 22.

Others are laugh-out-loud funny, such as when Franklin Graham’s mother, Ruth Graham, spotted a “most ridiculous-looking man” walking down a beach wearing loud shorts, black socks and Hush Puppy shoes: “As he drew closer, she gasped. ‘Oh no, it’s my husband!’”

But Graham, now 65, doesn’t hold back his own views. He writes that while Republicans shouldn’t take Christian voters for granted, “The progressives have infiltrated our schools, our government and our nation. Progressivism is nothing more than godless secularism, and it has stormed through the gates of America’s bulwark.”

And in a page-long condemnation of sex and vulgar language on television, he writes: “Freedom of speech has evolved into a massive monster.”

While Graham is ostensibly referring to racy shows and advertisements, the pronouncement is open to multiple interpretations, said Bill Leonard, professor of Baptist Studies at Wake Forest University. “The country, and the Christian community in the U.S., is so divided that there will be some who will read him and think he’s trying to put words in his father’s mouth. But then there will be others who say Franklin is standing in the footsteps of his father.”

Asked how he squares his book’s admonishments against profanity and pornography with his defense of Trump, who has been accused of inappropriate behavior, Graham gave a measured answer.

“On this thing with Stormy Daniels and so forth: This stuff happened 12 years ago. This isn’t behavior that has taken place since he’s been president. These things happened long before he became president,” he said in the interview. “That doesn’t make it right. And I don’t defend those kinds of relationships he had. But the country knew the kind of person he was back then, and they still made the decision to make him the president of the United States.”

As for his criticism of progressives, he says he’s not trying to align with either party.

“Unfortunately this progressive movement is more prevalent right now in the Democratic Party, but it’s also in the Republican Party. And it’s growing. And this is a very dangerous thing,” he said. “I was a Republican and I went independent — I just got sick of all of them and didn’t want to be beholden to any group.”

Eschewing party labels would likely have pleased the father Graham describes as a humble man who wanted to keep the focus on God.

Some have started working to place a statue of him in the Capitol, while others are petitioning for a Billy Graham holiday.

“My father would have said: ‘This is too much Billy Graham.’ He wouldn’t have liked it,” Graham said. “There was discussion at one time about taking his name off the name of the organization. He didn’t like it being called the Billy Graham Evangelistic Association. He didn’t want people talking about Billy Graham. And this is one of the things in the book that I want to try to get people to understand: My father wanted his life to be about God.”