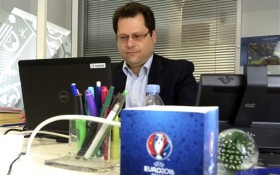 An unidentified drone buzzes a soccer stadium crammed with spectators at the European Championship. It might just be carrying a camera. Or something more sinister. Toxic chemicals, perhaps.

Either way, the unauthorized flying machine is violating a no-fly zone in place for Europe’s biggest sports event since deadly attacks in Paris last November.

Taking no chances, Euro 2016 organizers said Tuesday that new technology will be deployed at the June 10-July 10 tournament in 10 French cities to protect against unwanted airborne intruders.

In an interview with The Associated Press, Euro 2016 security chief Ziad Khoury said no-fly zones will be declared over all 10 stadiums as well as training grounds for the 24 teams.

“We’ve noted the general proliferation of drone-usage in society,” Khoury said in his Paris office. “So no-fly zones will be defined over every training ground and every stadium, and in most stadiums and for most matches anti-drone measures — which are quite innovative — will be deployed, working with the state, which will interfere with drones and take control of them if they are spotted.”

French authorities have been alarmed by dozens of mystery drone overflights of sensitive sites — mostly nuclear facilities, but also military installations and even the presidential palace. In response, the government is funding research into technology that could interfere with or jam signals that control drones, or even destroy them.

The government’s General Secretariat for Defence and National Security confirmed to the AP that anti-drone measures will be in place for Euro 2016 but said the exact type of technologies to be deployed will be decided in coming days.

The French gendarmerie already has powerful but not particularly sophisticated portable equipment that could help steer drones away from stadiums by interfering with GPS signals; its drawback is that it could also interfere with GPS signals for civil use, including for aircrafts.

Microwave technology that could bring down drones is also being looked at, as are other ground-based technologies to cut or jam signals to the flying machines.

French authorities have trained for the possibility of drones being used to disperse chemicals over spectators. A training exercise in April in Saint-Etienne, a Euro 2016 city in southeast France, imagined that a drone carrying chemical agents had plunged into crowds at the Geoffroy Guichard Stadium, which will host three group matches in June and one game in the knockout round.

“When you prepare an event of this size, you must imagine all scenarios, even the most unlikely,” Khoury said.

He said authorities have no specific intelligence to indicate drones are a threat. Anti-drone measures to be deployed by the French air force and police “aren’t necessarily infallible, because the technology is new and the drone phenomenon is recent. Let’s say it is a dissuasive measure that didn’t exist at previous sports events,” he said.

“The idea is not to destroy the drones, because there could be collateral damage, notably if they crashed into the public. It is to prevent them from flying over the stadiums and perhaps to arrest their pilots,” Khoury said.

Expanded security perimeters around stadiums should keep any drone pilots at a considerable distance, he said.

“So the risk for matches should be limited. For other sites, it’s a different matter,” Khoury said.

“With drones, it could be curiosity. It could be fans. It could be something more malicious,” he said. “Nothing has been identified in particular. It’s simply that we are working on all hypotheses so we could respond.”