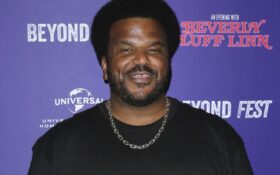 Fox’s hit series “The Masked Singer” is getting company with “The Masked Dancer,” a chance for celebrity contestants to show off their moves in disguise.

Contestants won’t be performing solo: Masked partners and back-up dancers will be joining them for a range of music and dance styles, including hip-hop, salsa, jazz and tap, the network said Wednesday.

Filming has begun on the series, which will debut in December, Fox said. A date and guest judges are yet to be announced.

Fox Entertainment executive Rob Wade described host Robinson as “hilarious as always” and lauded the panelists as the right blend to “lead our awesomely weird world of masks into a whole new genre.”

The series was inspired by a segment on “The Ellen DeGeneres Show” and DeGeneres is an executive producer for “The Masked Dancer,” Fox said.

“The Masked Singer,” based on a South Korean TV show and an instant hit when it debuted in January 2019, has featured T-Pain, Wayne Brady and Kandi Burruss among its winning contestants. Jeong is among the show’s panelists.