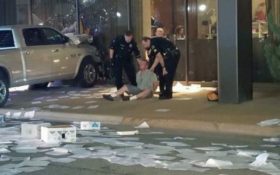 Just days after NBC News’ Chuck Todd called for people to “fight back” against conservative critics of the media, a man ranting about “high treason” reportedly drove his truck into a Fox News studio in downtown Dallas.

Police detained a “ranting” man after they say he intentionally rammed his truck into a local Fox News television station KDFW Fox4’s building Wednesday morning in downtown Dallas during a live broadcast.

The popular Fox News affiliate posted pictures on social media showing photos of the front of the vehicle rammed into windows near an entrance. The man paced and scattered dozens of handwritten papers outside calling for an investigation into “treason” and “witchery.” He was quickly arrested by police officers.

A man crashed a truck into the side of our building this morning. He jumped out and started ranting. He’s in custody now but the bomb squad is on its way. He left behind a suspicious bag. Most have been evacuated & a few are working to keep the news on air from a secure location. pic.twitter.com/X3UpLbYk85

Anchors who continued on the air through the 7 a.m. newscast, despite the crash, say nobody was hurt. The truck rammed into an administrative side of the building before regular office workers had arrived for the day.

A KDFW Fox4 statement said, “A man crashed a truck into the side of our building this morning” and “jumped out and started ranting.”

#BREAKING Inside the damage. This is one of three offices affected. A shout out to whoever makes that glass coating which held the shattered walls together for the most part. pic.twitter.com/vRtpeITK3n

According to reports, he repeatedly rammed the building with his truck before getting out and spreading hundreds of leaflets.

Some of the papers the suspect was carrying when he repeatedly rammed his truck into the @FOX4 building ranting about a police involved shooting pic.twitter.com/LNZMiNLsal

Anchor and reporter Brandon Todd, who witnessed the man pacing outside the station before he was arrested, said the man was yelling about “high treason,” and that he believed he had clearly been wronged and that someone was trying to kill him.

“The suspect, identified as 34-year-old Michael Chadwick Fry, was described as being an ‘agitated mental state,’ and will face charges for criminal mischief,” Fox News Channel reported. “Fry was previously arrested in 2016 in Denton County, located outside of Dallas. He was also arrested in Dallas County in 2011, according to FOX4.”

“It’s not real clear to what his message was,” according to Todd.

Police haven’t replied to phone messages seeking further details, including a possible motive. A remote-controlled police robot later searched the area near the station, which was closed to the usual downtown business foot and vehicle traffic.