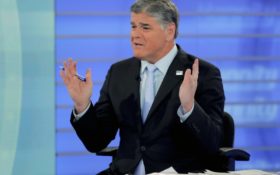 Fox News star Sean Hannity has jumped into the Pennsylvania U.S. Senate race between Democrat John Fetterman and Republican Dr. Oz — and this week the feud got serious.

“As of now, the Fetterman campaign is refusing to debate Doctor Oz and also refusing my invitation to appear on this program — as he and his campaign have been lying about me, raising money off of my name,” Hannity said.

“He apparently sent yet another fundraising text, attacking me, lying about me, calling me a liar,” he said. “Every day he lies about me. I’ll continue to tell the truth about his radical, extreme positions.”

“By the way, my trust-fund brat friend, when you attack me I will attack you back 10 to 100 times harder,” Hannity said. “Because you’re a lying loser and raising money for your losing campaign.”

Fundraising in another person’s name could be illegal since Fetterman is doing so without permission — and Hannity might soon see him in court.

“He may be hearing from my lawyers very shortly,” Hannity said. “He better hope that mommy and daddy have enough money to pay his legal bills.”

“We don’t lie on the show,” he continued. “Instead of accusing me of lying — which we don’t do — John needs to quit his whining. Stop his crying, man up, put on his hoodie, and defend his radical opinions.”