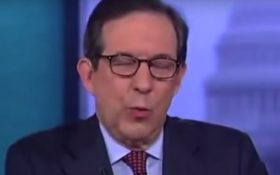 Some Fox News stars have joined with other mainstream media liberal pundits and have called for a ban on guns — and it didn’t go over well with this Florida parent.

Fox News star Chris Wallace had grieving father Andrew Pollock on Sunday to ask about gun rights, he got an answer no one expected.

“It’s not gonna be fixed because I heard what you just said, what you’re focused on. You’re talking about gun control.” Pollock said. “Gun control is a big issue. No one in America is going to come together on gun control. You didn’t say one thing about fixing [school safety.]”

“And I just listened to you, and you didn’t mention one question to Gov. [Rick] Scott about, ‘What are we going to do about the security of our children?'” Pollock pointed out.

“You’re just talking about gun control, which is going to give you more ratings like every other media event,” he said.

“My kids not here because the schools weren’t safe. That’s the main thing. If you go to the courthouse, the judge is safe. The stenographer isn’t worried that someone’s coming in with a gun, because you can’t get in there with a gun!” he continued.

“The American people, we just want our schools safe. We don’t want to talk about guns right now,” a visibly upset Pollock said.

You can watch the stunning video here —