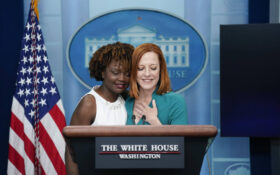 In fact, it only took one day.

You want to bring down inflation?

Let’s make sure the wealthiest corporations pay their fair share.

“And so it’s very important that… you know… as we’re seeing costs rise, as we’re talking about how to… you know… you know, build an America that is safe, that’s equal for everyone, and doesn’t leave anyone behind, that is an important part of that as well,” Jean-Pierre said about the tweet.

Unsatisfied with that nonanswer, Doocy asked the question again.

“So look, we encourage those that did very well, that… you know, by not… if… without having a fairer tax code, which is what I’m talking about,” Jean-Pierre stammered. “Then all… every, like, manufacturing workers, cops… you know, it’s not fair for them to have to pay higher taxes than the folks that… who are, who are, who are not paying taxes at all or barely have.”

“But what does that have to do with inflation?” Doocy shot back. “The president said, ‘If you want to bring down inflation, let’s make sure the wealthiest corporations pay their fair share.’ Jeff Bezos came out and tweeted about that. He said, ‘The newly created Disinformation Board should review this tweet.’ Would you be okay with that?”