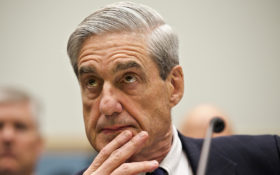 As former special counsel Robert Mueller finished up his first round of questioning with the House Judiciary Committee, one thing was clear to Fox News’ Chris Wallace: Democrats and Mueller were both in very big trouble.

Mueller’s testimony was suposed to help liberals try and impeach President Donald Trump. Instead, it backfired — and ended up helping the White House.

Wallace noticed that the testimony actually wasn’t even a testimony at all. It consisted of a series of charged questions, most of which Mueller declined to answer. The ones he did answer, much of his explanations were spent stammering through responses.

“I had to laugh a little bit when you talked about the testimony by Robert Mueller because testimony has to be put in quotes,”  Wallace said. “It really hasn’t been much testimony.”

“He has seemed very uncertain with his brief.”

Mueller often had difficulty remembering key parts of the report that he said he wrote..

As promised, Republicans came at Mueller hard — and the former special counsel’s competence was quickly called into question.

A pair of GOP congressmen from Texas, Reps. John Ratcliffe and Louie Gohmert, offered up the most scathing of critiques. Ratcliffe said by writing the report that Mueller “managed to violate every principle in the most sacred of traditions about prosecutors not offering extra prosecutorial analysis about potential crimes that aren’t charged.”

And Gohmert claimed that Mueller was “perpetuating injustice.”

Mueller — who was quiet throughout the entire questioning — chose to also stay silent in the face of such harsh criticism.

He let Republicans on the committee drag his name through the mud.

Mueller did nothing to stop it, or correct the narrative.

Wallace said that hurt both Mueller and Democrats.

“He has been attacked a number of times and you would think that almost anybody else would have defended his own integrity and the integrity of the investigation. Over and over, Mueller just sits silent and allows the attacks from the Republicans to sweep over him and says nothing,” he said.

The Fox News star openly wondered, perhaps along with millions of other Americans, whether or not Mueller even had control of the investigation to begin with.

“I think it does raise questions about the degree to which he actually was in charge and in control of this report because he doesn’t seem very much in control or in charge of what the final report was.”

You can watch video of Wallace’s reaction below: