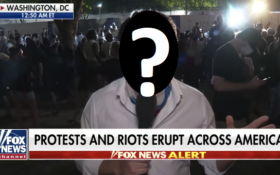 After more than ten years at Fox News Channel, one of the network’s biggest young stars is leaving — and is heading to a rival news channel.

In a press release, NewsNation announced it had signed a veteran Fox News anchor as their newest star of a national newscast set to compete with the rival conservative news giant.

Leland Vittert will move to the young network as an anchor/correspondent starting on May 17.

“Later this year, he will begin anchoring a new national newscast as NewsNation continues its commitment to expand its news programming across all time periods,” the company announced through a press release.

Vittert first made an impact as a Middle East reporter and covered the “Arab Spring” live in the region for Fox News in 2010 and 2011.

In 2014, Vittert moved to domestic coverage before landing a spot as the anchor of Fox News’ weekend show, America’s News Headquarters. He most recently made headlines after being attacked by a mob of rioters outside the White House while covering the protests over George Floyd’s death in 2020.

“Never before has reporting without fear or favor been needed more in our country, and not just because the stakes are so high, but because it’s so difficult to find,” said Vittert said in the press release.

“Choosing to leave FNC after 11 great years wasn’t easy but joining the NewsNation team is a once in a lifetime opportunity. I am excited to join the growing NewsNation team and I am laser-focused on providing compelling, unbiased news.”

You can read the official press release from Nexstar Media below:

Mr. Vittert has served as an anchor/correspondent with Fox News Channel (FNC) since 2010, beginning his career with the network as a foreign correspondent based in Jerusalem. He started his work in the Middle East by covering the events of the uprising in Egypt that became known as the “Arab Spring.” In 2011, he was one of the few reporters to broadcast live from Cairo’s Tahrir Square on the night that Egyptian President Hosni Mubarak relinquished power.

Mr. Vittert then covered the subsequent revolution in Libya, where he reported on Muammar Gaddaffi’s counterattack on citizens. He also covered the 2012 war between Israel and Hamas and interviewed Muhammad al-Zawahiri, the brother of Al-Qaeda leader Ayman al-Zawahiri. Before moving to Washington, D.C., in 2014, Mr. Vittert spent a month in Eastern Ukraine as Russian-backed militias took over parts of the country. From 2015 to 2021, Mr. Vittert anchored FNC’s America’s News Headquarters, a weekend afternoon newscast.

“Never before has reporting without fear or favor been needed more in our country, and not just because the stakes are so high, but because it’s so difficult to find,” said Mr. Vittert. “Choosing to leave FNC after 11 great years wasn’t easy but joining the NewsNation team is a once in a lifetime opportunity. I am excited to join the growing NewsNation team and I am laser-focused on providing compelling, unbiased news.”

Mr. Vittert also has covered domestic protests and riots in the U.S. He broke the news regarding former Baltimore Mayor Stephanie Rawlings-Blake’s alleged stand-down order to police during the riots that followed the death of Freddie Gray. Following the murder of George Floyd, Mr. Vittert covered the protests outside the White House, where he and his crew were physically assaulted.

“Leland’s vast experience in the field and on the front lines of some of the most important stories of the last ten years, give him a unique perspective on the news and an ability to frame events in context so that viewers really understand what’s happening,” said Sean Compton, President, Networks, Nexstar Media Inc. “He’s a respected veteran journalist and his expertise is another clear demonstration of our commitment to fact-based, unbiased news programming.”

Prior to joining FNC, Mr. Vittert anchored the weekend news at KDVR-TV in Denver, Colorado, and was a reporter for WFTV-TV in Orlando, Florida, KATV-TV in Little Rock, Arkansas, KNWA-TV in Fayetteville, Arkansas, and WMTV-TV in Madison, Wisconsin.

Mr. Vittert graduated from Northwestern University with a B.A. in broadcast journalism and spent a year abroad at the London School of Economics. Viewers can find Mr. Vittert’s special reports on NewsNation weeknights from 6 to 10 p.m. ET (see here for where you can watch or stream) and 24/7 on the NewsNationNow app and at NewsNationNow.com.

NewsNation is a national news and entertainment cable network reaching 75 million television households across the United States. Formerly known as WGN America, the network is owned and operated by Nexstar Media Inc, a wholly-owned subsidiary of Nexstar Media Group, Inc (Nasdaq: NXST.) NewsNation is America’s source for unbiased news, where engaged citizens get news that represents the full range of perspectives across the country. It is the home of the country’s only live prime-time national newscast, NEWSNATION PRIME WITH MARNI HUGHES, ROB NELSON, AND ALBERT RAMON, as well as BANFIELD and THE DONLON REPORT. The network draws on the local market, regional and national expertise of Nexstar’s 5,500 local journalists in 110 local newsrooms across the country. NewsNation is available across a variety of cable and satellite providers, streaming platforms, online and on the NewsNationNow app.