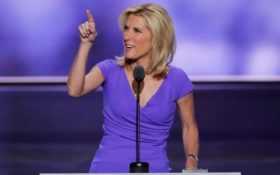 Now, those advertisers boycotting Ingraham are wishing they had never bowed to liberal pressure… because they are missing out on a massive 20 percent increase in viewership.

The Fox News star lost nearly 30 advertisers of her show “The Ingraham Angle” after mocking Hogg for his several college rejection letters.

The advertisers who held on strong during the boycott, though, are cashing in big time from the major ratings increase.

Media watchdog NewsBusters showed “a jump from 2.23 million viewers prior to Mr. Hogg’s campaign to 2.7 million since her return from a vacation,” according to The Washington Times.

Last week alone, Ingraham’s total viewers were up more than her first three months of the year. Her viewership saw a major jump during Friday’s coverage of the airstrikes in Syria, beating both MSNBC and CNN’s ratings in total viewers.

Just last week, Ace Hardware reversed their decision to cut ties with Ingraham’s show. Exactly a week after announcing they would pull all their ads from her show, the hardware store came crawling back asking to sponsor Ingraham’s show again.

The growing number of viewers suggests that Hogg’s call for boycotting Ingraham’s show has not only drawn some advertisers away, but also drastically increased her viewership.

Outspoken liberals should beware, begging for attention and using big name conservatives to drive your narrative comes at a cost — and the cost of this liberal’s boycott was a huge increase in ratings for Ingraham.