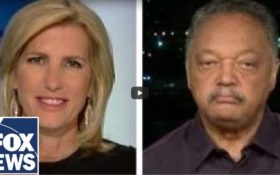 He got an earful in return — and the heated exchange left Ingraham’s fans cheering.

Jackson went on “The Ingraham Angle” to complain about Trump’s treatment of the NFL champion Philadelphia Eagles and other anthem protesters, and to talk about former NFL backup quarterback Colin Kaepernick’s lawsuit against the NFL. Kaepernick’s lawyers are attempting to subpoena Trump to testify in the case.

Ingraham asked Jackson what Trump had to do with Kaepernick’s grievances. “By interfering in the proces. The president has convinced his constituents of a de facto boycott, and the owners too, in fact, put a penalty before the players if they choose to protest,” Jackson said.

Ingraham replied that even the president had a first amendment right to express his opinion.

“Well, his opinion is no ordinary opinion, because he’s the president.” the reverend said, and that he was turning the public against the NFL and it’s players. Ingraham called the Eagles attack on Trump as “low rent”

103,000 Hospitalized Because of This Drug [sponsored]

“What Kaepernick, [NBA player] LeBron James, and [NBA player] Steph Curry are all saying … we’re being insulted by the violations of our people by this president,” Jackson complained.

“Is that black unemployment? Is that part of the violations of the people?” Ingraham shot back. “Is there any good news for black America under this administration? Do you like the unemployment numbers? Do you like small businesses being created?”

Under the Trump administration, the unemployment rate among black Americans is at a record low. Wages are increasing, too, Ingraham pointed out.

Jackson deflected, saying that Trump had inherited a growing economy.

“He gets no credit?” Ingraham asked, before ripping Jackson to pieces after he continued to press.

“This president is actually bringing jobs back to the United States and doing stuff like prison reform with Jared Kushner and others who were working together, including even Democrats,” Ingraham continued. “From what I could hear, this president has done nothing good for black America, is that what you’re saying tonight? Nothing?”

You can watch video of the exchange here —