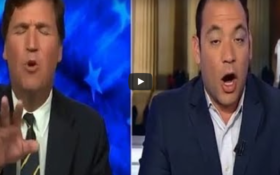 Carlson immediately called Aristimuno out, told him he was being “stupid” and a “ridiculous person” for pulling out the race card — and then ended the segment when Aristimuno wouldn’t come clean.

Carlson walked viewers through a recent Washington Post story on illegal immigrant gang members that had overrun an American school.

William Wirt Middle School is so filled with violence that teachers are afraid to go to work. Drugs and gang signs are both openly shared. Bloodshed is more common than peace. A huge influx of illegal immigrants is to blame, Carlson said. They changed the school virtually overnight.

But to the former top Democrat, that situation is acceptable — and anyone who says otherwise is racist.

Aristimuno defended the illegal immigrants, saying that Republicans like Carlson were using MS-13 to label all Hispanics and Latinos as gang members just because of their race.

“You’re a ridiculous person for saying that! I’ve never suggested anything like that. It’s appalling that you would say that,” Carlson replied. “You’re speaking a lie — and not for the first time.”

Aristimuno claimed there was no solution to illegal immigration except general amnesty for non-criminals.

“It’s hilarious that that solution comports exactly with your political goal, which is to create more Democratic voters,” Carlson said.

“So your answer and many Republicans’ answer is to deport the 14 million illegal immigrants in the country,” Aristimuno replied.

“This is just another stupid political talking point from a stupid person… I don’t have time for conversations with people who don’t know what they are talking about and haven’t thought it through and want to come on and spew more talking points and call anyone who disagrees, a racist. Which is what you did in the very first sentence of this segment,” Carlson said.

“Thank you. You are pathetic.”

You can see the heated exchange below —