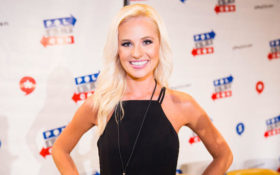 Fox News contributor Tomi Lahren was enjoying brunch with her parents on Sunday when a liberal mob in Minneapolis began verbally — and physically — assaulting her family.

As Lahren and her mother were leaving the restaurant, a group of young women were glaring at her. As they walked by the table, one unidentified woman threw a cup full of water at Lahren.

Footage of the incident shows the attack happened while another male restaurant patron could be heard verbally attacking Lahren as a “b*tch” and other obscene profanity.

The clip of the attack was shared on Twitter with the caption reading, “Throws a drink on Tomi Lahren hahahaha.” The bottom of the screen reads, “Thanks for the screenshots I did it lol.”

Whoever threw this drink at Tomi Lahren, thank you pic.twitter.com/RJE8xTDMZ3

Another clip of the incident included a restaurant patron screaming profanity at Lahren as she spoke with security and then exited the restaurant.

Whoever the guy is that cussed her out, I hope you're having an amazing day pic.twitter.com/wpr4egwtBQ

On Wednesday morning, Lahren appeared on “Fox & Friends” to discuss the assault and stated, “I’m tough, I can handle it.” But she highlighted the fact that she is a human, and being physically attacked in front of her family was humiliating for her.

The woman who threw the water had a goal in mind, Lahren said, and it was to get her 15 minutes of fame. In the end, the nasty attack by liberals exposes the true hatred the left holds in their heart.

Everybody is with Tomi Lahren, a truly outstanding and respected young woman! @foxandfriends

Clips of the incident became viral on social media, leading to a a supportive tweet from an unlikely source. Liberal comedian Kathy Griffin tweeted, “I couldn’t disagree more with @TomiLahren, but I don’t think it’s cool to resort to physical actions to make your point.”

I couldn’t disagree more with @TomiLahren, but I don’t think it’s cool to resort to physical actions to make your point.

The first amendment is a beautiful thing – use it. https://t.co/Yx8obh0aH0

It is very disheartening that there are Americans that feel they can physically attack others because they do not agree with their political opinions.

So much for the tolerant left.