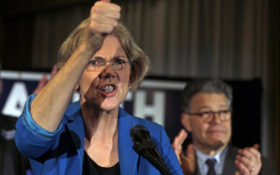 And her dreams about bringing President Donald Trump up on impeachment charges are insane.

Fox News isn’t alone in condemning Warren’s divisive rhetoric. Even her fellow Democrats are screaming at her and some of her 2020 Democratic nominee candidates to pump the brakes.

The American people don’t want the president impeached, polls show — and tone-deaf Democrats that try to push the issue on the campaign trail could cost the party their shot at the White House.

Warren and top Democrats vying for the White House in 2020 are clamoring for impeachment proceedings against Trump, but many of their congressional colleagues are far more wary.

The same day House Speaker Nancy Pelosi urged rank-and-file Democrats to proceed with caution following the release of special counsel Robert Mueller’s report detailing 10 areas of potential obstruction of justice, Warren ignored the request. Instead, she doubled down on her impeachment call.

“If any other human being in this country had done what’s documented in the Mueller report, they would be arrested and put in jail,” Warren said Monday at a CNN town hall in New Hampshire.

The split reflects deep tensions that could emerge in coming months between Democrats on Capitol Hill and those seeking the party’s presidential nomination. While the White House hopefuls are trying to rally their base with “fantasy” proposals, those in Congress are tasked with the more arduous task of governing.

The dynamic has already been on display with proposals such as the Green New Deal, the $93 trillion spending plan which many presidential candidates have embraced to prove their progressive bones even as it goes nowhere in Congress.

But the debate over impeachment is particularly explosive, and Democrats — including those seeking the White House — are divided over whether it would distract from besting Trump at the polls.

“If impeachment is viewed as a gussied-up censure vote, rather than a constitutional remedy, then the liberals who are pushing it don’t care if it’s forlorn or not,” Fox News’ Howard Kurtz wrote Wednesday. “They just want to do something cathartic, regardless of the real-world consequences.”

“But the Democrats who fervently want Donald Trump out of office have a better option: Beat him at the ballot box next year,” Kurtz said.

Pelosi has been adamant that impeachment is impossible without bipartisan public sentiment for the House to formally charge Trump. Speaking Tuesday at the Time 100 summit, she called bringing such an action “one of the most divisive paths that we can go down.”

Republicans who have been critical of Trump have also urged caution on impeachment.

Appearing in New Hampshire on Tuesday, Maryland Gov. Larry Hogan said he didn’t believe such an effort “would be productive.”

“I think most people in America are sick of this whole two-year investigation,” said Hogan, who is considering a potential primary challenge of Trump. “I don’t think there should be Democratic overreach.”