Fox News' Shep Smith to be FIRED!? - The Horn News 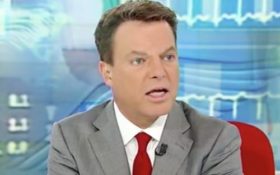 Things are heating up at Fox News as some of the network’s biggest names are sniping at each other – and stunned viewers are watching the feud unfold in realtime on live television.

It’s gotten so bad that daytime anchor Shepard Smith has reportedly been warned to back off… or he’ll be yanked off the air and fired.

That set Smith off. The next day, he slammed diGenova’s comments as “repugnant” and even attacked Carlson for letting the comment go “unchallenged.”

That night, the two returned fire.

“Not clear if that was you or me – but someone is repugnant,” Carlson said, mocking Smith’s insult.

Carlson then accused Smith of spreading his opinion, but disguising it as news.

Napolitano has been a staunch Trump critic, although Trump has accused the former judge of sour grapes.

“Ever since Andrew came to my office to ask that I appoint him to the U.S. Supreme Court, and I said NO, he has been very hostile!” Trump tweeted earlier this year. “Also asked for pardon for his friend.”

And while Smith claims to do an unbiased news show rather than an opinion broadcast, he has certainly taken his own partisan shots at Trump, attacking the president as “xenophobic” and accusing him of spreading “fake news,” among other things.

Publicly, management hasn’t taken a side in the spat between him and Carlson.

But behind the scenes, there’s at least one report that they’re ticked off at the daytime host for going after Carlson, who typically has more than twice as many viewers as Smith.

Vanity Fair says the network’s CEO and president have both essentially told Smith to stop — or else.

“They said if he does it again, he’s off the air,” a source told the magazine.

A network publicist told the magazine that management didn’t have any “direct” conversation with Smith about Carlson.

Smith has a history of taking potshots at the network’s evening hosts, especially Carlson.

Over the summer, when Carlson said white supremacy is “not a real problem” in the United States, Smith took him to task the next day.

He didn’t mention Carlson by name, but said on his show: “White nationalism is without question a very serious problem in America.”

Smith has in the past said that what he does in the daytime and what Carlson, Sean Hannity and Laura Ingraham do at night are different operations.

And he hasn’t exactly sounded happy about it.

“We serve different masters,” he told TIME magazine last year. “We work for different reporting chains, we have different rules. They don’t really have rules on the opinion side. They can say whatever they want. If it’s their opinion.”

He claimed the evening hosts are “there strictly to be entertaining” rather than to deliver the news.

Not only that, but he claimed he doesn’t watch it, either.

“I don’t really watch a lot of opinion programming,” he sniffed. “I’m busy.”

But as this week’s tiff with Carlson shows, he’s definitely watching.