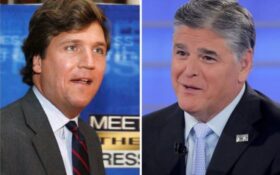 In the same case, a former Fox employee said she was harassed and raped by news anchor Ed Henry, who was fired July 1 shortly after the network became aware of the accusations.

Hannity and Carlson represent two-thirds of Fox’s lucrative prime-time lineup, while Kurtz hosts the weekend “Media Buzz” show. None of the men have been mentioned before in any misconduct allegations at Fox until the charges were made by Cathy Areu.

The lawsuit filed in New York describes Areu’s discomfort with a March 2018 incident on the set of Hannity’s show where the host allegedly put $100 on a desk and challenged the men on his staff to take her out on a date.

She said she was a guest on Carlson’s show in December 2018 and that after it was over, he told her he was staying in a hotel room in New York that night without his wife and children. In 2019, she said Kurtz invited her to his hotel room to discuss her hope of getting a full-time job at Fox. When she instead invited him to dinner with her and a friend, he declined, she said.

In the cases of Carlson and Kurtz, Areu believed the men were making sexual advances, the lawsuit said. Areu said she was also propositioned by Gianno Caldwell, a Fox contributor.

Based on an outside law firm’s investigation, Fox said it found all of Areu’s claims “false, patently frivolous and utterly devoid of any merit.” Fox said it would defend itself vigorously.

Areu also said she got several lewd messages from Henry. But it was the accusations made by Eckhart, a former employee, that led to the anchor’s dismissal. Her allegations weren’t made public when Henry was fired.

Eckhart, who was 24 at the time, claimed the 49-year-old Henry restrained her with metal handcuffs, took nude pictures of her, and raped her in a hotel room. She said that he had asked Eckhart to be his “sex slave” and “little whore” and punished her when she did not comply with his demands.

“The Me Too movement has helped to bring to light a number of injustices in our society, and everyone that has suffered deserves to be heard,” Foti said. “This is not one of those cases.”