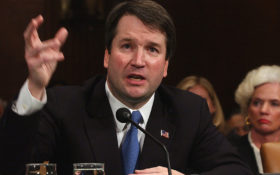 Supreme Court Justice Brett Kavanaugh’s confirmation was a historic event — and in a ratings shocker, millions of Americans flocked to Fox News to get their analysis.

The data suggests that Americans sided more with Kavanaugh supporters than his critics after the controversial hearing. Much more.

The Senate’s vote confirming Kavanaugh sent record numbers of viewers flocking to Fox News, which recorded its biggest Saturday audience in more than a decade.

Fox’s daytime audience was stunningly huge. In fact, it was bigger ratings than any since Hurricane Katrina in 2005, while its Saturday prime-time lineup eclipsed anything since the Iraq War in 2003, the Nielsen company said.

Fox reached 4.34 million viewers for the Senate vote. Rivals CNN and MSNBC combined had less than half of that audience.

It was closer on Friday for what proved the decisive moment — when Maine Sen. Susan Collins announced her choice, insuring that Kavanaugh’s nomination would succeed.

Kavanaugh’s nomination received more coverage on the broadcast evening news programs than any other Supreme Court nominee over the past 30 years, topping the proceedings involving Clarence Thomas, according to news consultant Andrew Tyndall.

Record numbers of Americans flocked to their televisions to tune in to the final Kavanaugh moment — and chose a non-liberal news outlet to get their information by a 2-to-1 margin.

That may indicate that American voters largely supported Kavanaugh’s confirmation in the end.

Who had the fairest coverage of Brett Kavanaugh's confirmation?