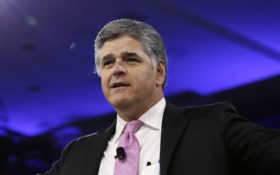 Hannity revealed that MSNBC’s Rachel Maddow’s reputation has become so bad, and she’s considered part of a “conspiracy mob.” After special counsel Robert Mueller’s report destroyed the Russian collusion narrative, The New York Times has ordered its reporters to stay away from her show.

The Times executive editor Dean Baquet has even gone so far as to personally demand his reporters cancel previously scheduled appearances on MSNBC.

It’s being called a liberal media civil war — and Hannity said it’s evidence that the mainstream media is “running scared.”

“The New York Times? They are now scared, taking notice, and they are realizing, ‘Uh-oh, we’ve been duped by the conspiracy TV media mob,’” Hannity told his viewers in a fiery monologue to open his show Thursday.

The Fox News host is referring to a Vanity Fair article that was released Thursday. According to author Joe Pompeo, The New York Times has banned its reporters from appearing on a list of “inconsistent, incoherent, and poorly conceived” news shows.

“Look at this new report!” Hannity said. “The New York Times is warning editors and reporters against appearing on prime time shows on ‘Fake News CNN’ and ‘Conspiracy TV MSNBC.’”

“Why would the New York Times … not go on their favorite programs, who refused to ask the tough questions to begin?” Hannity asked.

Hannity pointed out that the mainstream media has almost entirely ignored the clarifying remarks made by special counsel Robert Mueller and the Department of Justice released Wednesday after his press conference.

Mueller’s statement read: “The Attorney General has previously stated that the Special Counsel repeatedly affirmed that he was not saying that, but for the [Office of Legal Counsel’s 1973] opinion, he would have found the President obstructed justice. The Special Counsel’s report and his statement today made clear that the office concluded it would not reach a determination — one way or the other — about whether the President committed a crime.”

“There is no conflict between these statements,” Mueller’s statement concluded.

“Did Robert Mueller forget his previous statements in yesterday’s remarks?” Hannity asked. “Or, did he intentionally muddle the waters to fuel the Democrats’ unrelenting impeachment rage psychosis?”

Hannity went on to say that Mueller is “scared to death to testify” in front of Congress because, unlike the mainstream media, he’ll face “real, tough questions” from conservative lawmakers.

The liberal spin surrounding the Mueller’s investigation into Russian meddling has fallen apart. The mainstream media has started desperately blaming each other.

And the far-left “conspiracy mob” is “running scared.”

And President Donald Trump is leading the counter-attack.