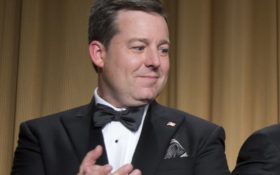 Fox News has announced a lineup change to one of its most popular shows.

The transition settles the network’s lineup after former longtime host Shepard Smith abruptly resigned in October amid his ongoing feud with the opinion personalities.

Henry, a longtime Washington D.C. correspondent said: “It has been an incredible honor to cover major breaking news here at home and all around the world as chief national correspondent and chief White House correspondent before that.”

“Now I am grateful to take that experience to the anchor desk, and help kick off our news coverage every single morning.”

Internally, Fox officials say they are excited about the new changes at the network.

President Jay Wallace said, “Ed is one of the best all-around journalists in the field and his ability to transition from breaking news to anchor has made him a valuable addition to the team. I have no doubt he’ll excel alongside Sandra Smith as co-anchor of America’s Newsroom.”

Henry has served Fox News since 2011.

He was previously a White House correspondent for CNN.