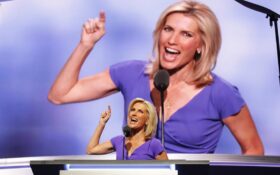 A little more than 24 hours after President Joe Biden’s congressional address, Republicans are making their case to American voters.

Now, Fox News is getting involved with a primetime shakeup this Thursday.

Instead of “The Ingraham Angle” that viewers are regularly used to, a different program will be taking place.

On Thursday night primetime host Laura Ingraham will be joined by Govs. Ron DeSantis of Florida, Greg Abbott of Texas, Kim Reynolds of Iowa, Tate Reeves of Mississippi, and Pete Ricketts of Nebraska.

There’s no doubt they’ll respond to Biden’s address — and try to make their case as 2024 frontrunners.

The network has dubbed the event, the “Red State Trailblazers.”

Ingraham — who chose Orlando, Florida to host the event — told The Daily Caller she wanted to give a platform to the GOP governors that led Americans through the pandemic.

“Now that the 2020 election and the worst of COVID is behind us, it’s time to focus on the future and learn from the experience of governors who helped lead the way,” she said.

“Americans looking to Washington to solve their problems are invariably sorely disappointed  — and for good reason. Inside the Beltway resides a monster bureaucracy where cronyism beats out commonsense 9 out of 10 times.”

According to Daily Caller, the governors featured will also have the chance to respond to Biden’s congressional address.

If Sen. Scott’s GOP response is any indication, the governors will come out swinging.

The governors will also be taking live questions from an audience as well as discussing some of the most pertinent issues facing the country.

“This group is committed to growing their states’ prosperity and protecting liberties now under threat,” Ingraham noted.

“How will they deal with a crush of new migrants?

“The push to radicalize school curricula?

“The rising cost of everything from gas to groceries?

“The anti-police bias being stoked by celebrities and tech giants?

“We’ll tackle these questions and get their exclusive reaction to Biden’s first speech to Congress,” Ingraham said.

The major event is set to air 10 p.m. on Fox News channel on Thursday, April 29.