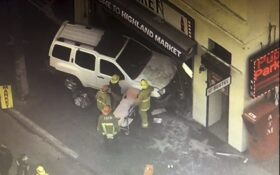 A longtime Los Angeles television news reporter and his photographer were among five people seriously injured Friday when an allegedly drunk driver crashed his SUV into a building along the Hollywood Walk of Fame, officials said.

At the time of the crash, FOX 11 reporter Hal Eisner, a well-respected journalist in Los Angeles for more than 38 years, had been working on a story with photojournalist Joab Perez Friday afternoon about the famous El Capitan Theatre and Los Angeles County’s partial reopening this week, which allows for movie theaters to open at limited capacity, according to FOX 11. Perez has been with the station for nearly three years.

The male driver has been arrested on suspicion of driving under the influence, the Los Angeles Police Department said. He told police he fell asleep at the wheel but failed field sobriety tests.

Authorities believe he was driving while intoxicated when he drove the SUV the wrong way and ran off the road, LAPD Capt. Brian Wendling said. The crash occurred along the Walk of Fame near the well-known intersection of Hollywood Boulevard and Highland Avenue.

Two of the other victims were tourists from Washington, LAPD Chief Michel Moore said on Twitter. One suffered severe injuries, including broken ribs and a broken leg. The other had moderate injuries, such as lacerations and abrasions.

Moore said the victims were all listed in stable condition about three hours after the crash.

The SUV crashed into a glass storefront on West Hollywood Boulevard around 3 p.m., striking several pedestrians, according to the Los Angeles Fire Department.

The reporter and photographer were among the five people taken to the hospital, the station said. At least four of them were initially considered to be in serious to critical condition, the LAFD said.

All were expected to survive their injuries, Wendling said.

Another pedestrian declined to be taken to the hospital, the LAFD said.