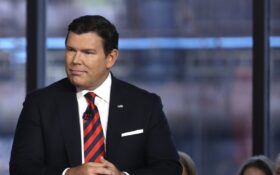 Fox News apologized Saturday for how it displayed a chart correlating the stock market’s performance with the aftermath of the deaths of George Floyd, Martin Luther King Jr. and Michael Brown.

The graphic that aired Friday to illustrate market reactions to historic periods of civil unrest “should have never aired on television without full context. We apologize for the insensitivity of the image and take this issue seriously,” the cable channel said in a statement.

The chart included on “Special Report with Bret Baier” illustrated gains made by the S&P 500 index after King’s assassination in 1968; the Ferguson, Missouri, police shooting of 18-year-old Michael Brown in 2014, and the May 25 death of Floyd while in Minneapolis police custody. It also measured the financial yardstick against the 1991 acquittal of Los Angeles police officers in the beating of Rodney King.

It was shown as part of a segment with Fox News and Fox Business reporter Susan Li focusing on the market rally that followed an unexpectedly lower number of jobless claims.

Other business publications and TV channels in recent days have compared the market’s performance to current and historic social upheaval, but with significant background and explanation.

Rep. Bobby Rush, D-Illinois, tweeted that the graphic makes it clear that Fox News “does not care about black lives,” while Michael Steele, former Republican National Committee chair and a MSNBC political analyst, posted, “This is how they mourn the loss of black men at #FoxNews – by how much the stock market goes up.”

Later Saturday, on Fox’s “America’s News HQ” telecast, anchor and senior correspondent Eric Shawn said the graphic should not have been used.

“Last night, Fox News Channel aired an infographic attempting to show the stock market on occasion gained ground in the midst of turmoil, civil unrest and even tragedy,” Shawn said. “In trying to make that point, the program ‘Special Report’ failed to explain the context of the times we are living in and should not have used that graphic.”