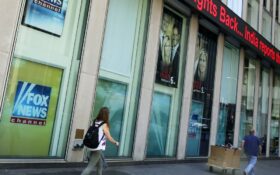 It’s no big secret that the Fox News network has had a heck of a journey over the past five months.

From dramatic staff shakeups, to stunning terminations, the network has seen its fair share of turmoil — all while the most hotly contested, controversial election unfolded.

And even more changes are coming.

Reports have now surfaced that Fox News Corporation CEO Lachlan Murdoch is “fleeing” the U.S. with his family. According to reports he’s saying goodbye to Los Angeles.

Instead, he’ll be staying in Australia…

Details so far are sparse on the big move. However, according to reports, Murdoch — son of media mogul Rupert Murdoch — has enrolled his children in a school in Sydney, one of the country’s biggest cities.

The network is reportedly knee-deep in two lawsuits from election machine companies Smartmatic and Dominion Voting that total $4.3 billion in alleges damages.

Still, Fox Corporation insists that Murdoch will successfully be able to run the company abroad.

“Lachlan continues to split his time between Los Angeles, New York and Sydney as he has for years,” the network wrote in a brief statement. “Our businesses all are thriving, even as we, like most organizations, have predominately managed our teams and communicated by zoom for the last 12 months.”

And a source close to the family also insists that there’s no need to worry because the move isn’t permanent.

“… just there for a bit of time,” a source said, according to The Hill reporting.

The sudden move comes as Fox News seems to be making major staff changes to welcome former President Donald Trump fans back into the fold.

The network is likely hoping it can take advantage of these hirings to strengthen its grip on the news cable crown. Reportedly March was a better month for the network.

But the move from Murdoch is so far making pundits wonder.