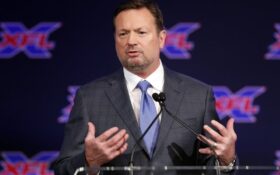 Meyer, the former Ohio State coach, spent two seasons with “Big Noon Kickoff” before leaving to become an NFL head coach for the first time with the Jacksonville Jaguars.

Stoops, 60, stepped down at Oklahoma in June 2017 after 18 years leading the Sooners. He was 190-48 and won a national championship in 2000 with Oklahoma. Stoops was selected to the College Football Hall of Fame in January.