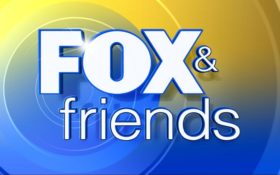 Morris was the co-host of the popular Fox News morning show from 2008 until 2017. He hosts a popular real estate investing podcast, but in recent months has been involved in numerous investor lawsuits.

According to his wife, Natali Morris, the family recently moved from their $1.4 million dollar mansion in New Jersey to a coastal town in Portugal.

Natali is a former MSNBC anchor, who said the family will continue fighting their lawsuits from their new home.

The Morris family has denied responsibility for the loses that investors blame them for, and instead point the finger at their former business partner Bret Whalen.

Clayton “claimed he was not responsible for managing Oceanpointe’s properties and that he was sickened to learn of tenants living in dangerous and filthy conditions bought, sold or managed by Whalen’s companies. Whalen has also denied any wrongdoing,” Salon reported. “The two men have been accused by investors of running a Ponzi scheme, selling them homes in Indianapolis ‘with a promise to rehab them, find tenants and manage the properties,’ according to IndyStar. Morris reportedly used web-based seminars and YouTube channels to attract potential investors.”

They have also denied they left the country to avoid these lawsuits.

“We have not run from anything. We continue to show up for this until the last lawsuit is dismissed and it is clear that we neither had the money from Oceanpointe investors nor did we defraud anyone,” she said.

However, lawyers for some of the investors said Clayton and his family were fleeing because they’re guilty.

“In my clients’ opinion, innocent people don’t flee the country,” Jynell Berkshire, an Indianapolis real estate attorney that is representing some investors in the lawsuit, said in a statement.

In a lengthy blog post, Natali said her husband was being unfairly targeted because he was a former cable news television star.

She claimed her family was being “stalked” by The New York Times, and that living abroad was their only choice to escape their “sleepless nights.”