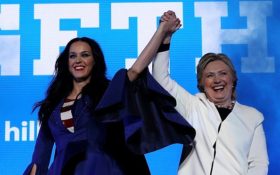 Liberal celebrity Katy Perry wasn’t personally effected by the bloody Islamic terror attack in Manchester on Monday – but she wants the people who were to listen up.

Fox News’ Fox & Friends, however, was having none of it.

“Many of these jihadis did not suffer from lack of exposure to the West. They were educated by the West,” said Malkin. “These people do not lack educations. We do not need a … social justice approach to terrorism. And that is the main difference we’ve seen in the Obama administration and [President Donald Trump’s] administration.”

That’s not what the liberal media is telling America, however.

They’re busy gushing over Perry… because Tuesday she ditched her armed security guards for a few minutes and interacted with normal people for a photo-op in New York.

Of course, the media ate the publicity stunt up.

“Clearly moved by news of the bombing … [Perry] got out of her car, walked away from her security and right into the crowd of fans,” celebrity site TMZ gushed. “She delivered a physical and a verbal message. This is how Katy’s mending her broken heart.”

A liberal celebrity wants us to open our borders to Islamic extremists… and to make her point about how we should all “coexist”, she walks a few feet away from her armed security guards for a moment?

Forgive me if I’m not impressed.

Mingling with your fans for a photo-op doesn’t make a point about “open borders” and how we should all “coexist.” Instead, it makes the opposite point.

Because it reminds us that Perry doesn’t have to “coexist.”

Most of us don’t have walled mansions surrounded by heavily-armed security details to live in. Interacting with crowds of average Americans is how my family lives every single day.

Liberal elitists don’t get it – and it’s shameful the mainstream media lets them get away with these ridiculous statements.

Millionaires like Obama and Perry don’t have to lock their own doors; they sleep soundly in their king beds under the watchful eye of their 24-hour security. They don’t have to change their own oil or walk their dogs or pull weeds in their garden. They have personal chefs that shop for them and chauffeurs that drive them wherever they please. They have landscapers, security details, private mechanics, and an in-house wait staff to cater to their every whim.

Sponsored: 35.6 million senior citizens secretly used as guinea pigs — Are you one of them?

If Perry wants to impress me with her commitment to open borders, she could do much more than ditch her security detail for a brief photo-op.

Instead, she should tear down the walls surrounding her mansion and rip off the front door so anyone can enter.

Perhaps Perry could even fire her security detail, throw away their guns and body armor, and open her multi-million dollar home to anyone that wishes to “coexist” with her?

To really make a point about open borders and love, she could empty her vault of the millions of dollars she’s horded and build dozens of refugee shelters on her own property.

We’d suggest that personally to Perry, of course, but she’s unreachable. Her assistant blocks outside calls, and the guards wouldn’t let us past the front gate.

— Stephen Dietrich is the Managing Editor of The Horn News. He is a combat veteran that fought against radical Islamic terror firsthand in Iraq.

Share your opinion on how liberal celebrities should 'coexist'

Liberal celebrities want open borders for America. We say, "You first!" Should Congress pass a law that makes these millionaire Democrats house refugees inside THEIR mansions first? Vote here --