Four festive cocktails perfect for the holidays, plus some advice - The Horn News 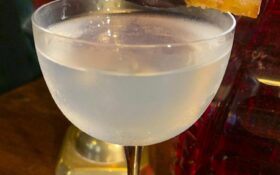 Looking to create a bit of winter luxury when tending bar at home this holiday season? London’s top cocktail-makers have some tips.

“Christmas is a special time when you want to join with friends and family. And sometimes, the centerpiece of any happiness is to have a good drink,” says Salvatore Calabrese, an Italian-born drinks expert and author who has been making cocktails at top hotels, bars and private clubs for over 40 years.

Currently at the cocktail bar Velvet, at London’s five-star Corinthia hotel, Calabrese goes by the nickname “The Maestro.”

And The Maestro’s advice?

“The glass is the star. It’s the canvas of the drink,” he says. So if it looks elegant, things already feel festive.

Next, think about the quality of the ice and how it dilutes the drink.

“Remember, ice is like the heat for the chef when he is cooking,” Calabrese says.

Cracked ice cubes that disintegrate in your palm are a no-go, as is crushed ice for Christmas. “It’s not a Tiki night,” he jokes. “It is about an elegant night, so make the effort and maybe you can make your own homemade ice.”

Also, he advises, plan. Even prepare your cocktail in advance. Especially when a drink is a little complicated.

“Put it in the freezer or in the fridge, so it’s nice and cold, so the only thing you have to do is to put it in a mixing glass or, to show off, put it in the shaker and shake,” Calabrese says.

Jake Burger, co-owner of The Distillery, a 19th century pub and gin distillery in London’s Notting Hill neighborhood, says that knowing when to shake and when to stir is something a lot of home mixologists get wrong.

“It’s fun using a cocktail shaker, so people think we should shake everything,” he jokes. But it’s only really needed when using fruit juices, egg whites or cream, he says. Otherwise, stirring is best.

“As a general rule, if all the ingredients are alcoholic, you probably don’t need to shake it,” says Burger. “So as an Englishman, it pains me to say it, but James Bond got it wrong. A martini should definitely be stirred, not shaken.”

Liana Oster, bar director at The NoMad Hotel London, suggests adding some seasonal luxury by decorating your glasses. She creates a peppermint-bark paint by melting equal parts cacao butter and white chocolate, with a few drops of peppermint essence added in. She then paints a swirl on one side of a cold glass, sprinkles some crushed-up candy cane on it, and then places it in the fridge until needed.

This works particularly well with a heavier cocktail with a lot of body, as at will “mellow it out” on the palate, Oster says.

Alex Girvan, brand ambassador for Masons of Yorkshire, has more ideas on garnishes. For his chocolate orange martini, Girvan explains how he creates simple yet delicious dipped-chocolate candied fruits.

First, dehydrate orange slices by placing them on a baking sheet, sprinkling them with a bit of brown or fine granulated sugar (known in Britain as caster sugar), and then putting them in the oven on low heat for about an hour, until dried out. Then melt some dark chocolate and dip the slices. Place them in the fridge until hard.

To serve, balance them on the side of the glass.

Girvan also suggests a sharing platter of garnishes, “almost like a charcuterie board.” By laying out rosemary, orange peel and lemon zest on sticks, “everybody can just pick the one that they like and pop it into their drink, and maybe they’ll try something that they’ve never had before,” he says.

“Just make a little effort,” Calabrese sums up, “because really, a great cocktail is a great journey from the beginning.

“And when you taste something nice and delicious, the world seems to be a better place.”

WINTERTIME NEGRONI, from The Distillery

Mix ingredients together over ice and stir. Serve over fresh ice and garnish with an orange wedge studded with cloves.

SCROOGE SOUR, from Common Decency, at The NoMad Hotel London

Pour the egg white into the larger tin of your shaker, and the simple syrup and lemon juice into the smaller tin. Dry shake together in the shaker to emulsify the egg and the alcohol.

Then hard shake with ice and pour over a strainer into your glass.

Add 0.75 ounces mulled wine slowly into the corner of the glass, and then sprinkle edible gold dust over the half of the surface to cover and garnish.

A few drops of orange bitters

Mix ingredients together over ice and stir. Serve over fresh ice and garnish with a slice of fresh truffle.

Mix ingredients together over ice and stir. Serve in a martini glass and garnish with a chocolate-dipped, candied orange segment.