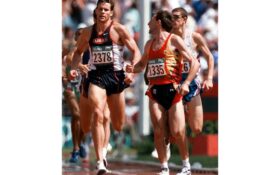 Paul McMullen, a runner who was a member of the 1996 U.S. Olympic team, died in a ski accident in northern Michigan, Eastern Michigan University said Friday. He was 49.

In ’96, McMullen won the U.S. Olympic Trials in the 1500 meters, qualifying for the Olympics in Atlanta that year. He made it to the semifinals.

“Paul was such a great guy and I am so sad for his beautiful family. I really have no words,” said Sue Parks, EMU’s director of cross country and track.

McMullen, a native of Cadillac in northern Michigan, lived with his wife and three children in Grand Haven, where he led a running club for kids called Chariots of Fire.

“He was always kind of an anomaly because he was 6-2 and change and probably 170 pounds,” said Tim Nichols, a former EMU runner. “Most of the guys he was competing with were 5-8, 120 pounds. He looked like a giant when he was on the track with a lot of guys he was running against.”

McMullen lost two toes in a lawn mowing accident in 1997. But he still won the mile run the next year at the USA Indoor Track & Field Championships.