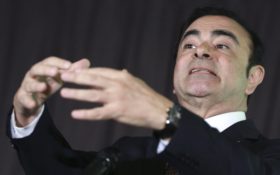 The charges imposed Monday involve allegations Ghosn’s pay was underreported by about 5 billion yen ($44 million) in 2011-2015. The prosecutors said earlier that the allegations were the reason for Ghosn’s arrest on Nov. 19.

The arrest of an industry icon admired both in Japan and around the world has stunned many and raised concerns over the Japanese automaker and the future of its alliance with Renault SA of France.

The prosecutors issued statements Monday outlining new allegations against Ghosn and Greg Kelly, the other executive. Those are of underreporting another 4 billion yen ($36 million) in 2016-2018. Nissan as a company was not mentioned in the latest allegations, which did not give details about the income thought to have been underreported.

In Japan, a company can be charged with wrongdoing. A court date is still undecided as the prosecutors continue to question Ghosn and Kelly.

The maximum penalty for violating Japan’s financial laws, as the prosecutors allege, is 10 years in prison, a 10 million yen ($89,000) fine, or both.

Some kind of action by the prosecutors had been expected because the detention period allowed for the allegations disclosed earlier was to end on Monday.

Nissan Motor Co. confirmed the charges against it in a statement and vowed to strengthen its governance and compliance.

Kelly, 62, an American, is suspected of having collaborated with Ghosn.

Kelly’s attorney in the U.S., Aubrey Harwell, told The Associated Press earlier this month that his client is asserting his innocence. He said insiders at Nissan and outside experts had said the handling of the income reporting was legal.

Ghosn has not commented.

Ghosn was ousted as Nissan chairman and Kelly lost his representative director title following their arrests. They both remain on Nissan’s board pending a shareholder’s meeting.