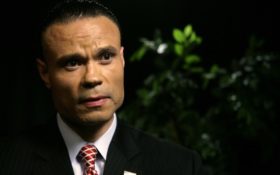 His criticism was prompted by a breach at the White House Friday evening, when a man with a backpack was able to make it onto the grounds of the White House while President Donald Trump was there.

The man was stopped before being able to enter the White House, but Bongino says this breach underlines more serious issues with the security of the White House.

“The president,” he warned, “is just not safe at the White House anymore because they’re not serious about the security plan.”

When the Secret Service released a comment that the breach was “nothing of concern to security operations,” Bongino said he wasn’t buying it.

He went on to assert that the agency isn’t increasing security measures due to concerns about the appearance of the White House, and there are groups that think, “‘Oh it doesn’t look good. You don’t want it to look like an armed camp,'” which Bongino calls “ridiculous.”

He warned, “If you think the Secret Service right now under the current security plan is prepared for a multiple-man tactical assault on the White House, you’re out of your mind.

Bongino served on the U.S. Presidential Protection Division during George W. Bush’s term, and remained on protective duty through part of Barack Obama’s first term, leaving in 2011 for a chance to run for Senate.