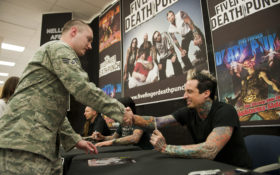 The former drummer of the heavy metal band Five Finger Death Punch has a new gig, as a southern Indiana police officer.

Jeremy Spencer was sworn in Sunday with the Rockport Police Department. He grew up near that Ohio River community in the city the Boonville, which he left at 19.

Spencer joined Five Finger Death Punch in 2005. He was the band’s drummer until late 2018.

He tells WFIE-TV he’s always admired police officers’ work, saying, “You just see the impact they have on everyone’s life. It’s so important.”

Spencer’s police duties are part-time. He’s splitting his time between Rockport and Las Vegas. He says he hasn’t retired from the music business.