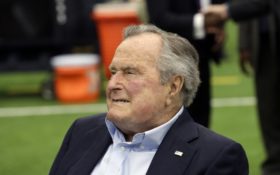 The hospitalization of former President George H.W. Bush caused him to miss out on a Memorial Day parade in Maine that he traditionally attends.

The 93-year-old said in a tweet Monday evening that he regrets missing the event earlier that day in Kennebunkport, down the road from his summer home. He also said he’s “forever grateful not only to those patriots who made the ultimate sacrifice for our Nation — but also the Gold Star families whose heritage is imbued with their honor and heroism.”

Bush was taken to a hospital Sunday after he experienced low blood pressure and fatigue. A spokesman said he’d likely be in the hospital for a couple of days for observation.

Residents attending the parade expressed concern for the nation’s 41st president. The event’s grand marshal, Tom Willey, mentioned the president in his remarks, wishing him a speedy recovery.

“He’s such a figure at our parades. He was definitely missed,” said Shawn Hayes, vice commander of American Legion Post 159.

Bush arrived for the summer in Maine on May 20 without his wife of 73 years, Barbara Bush, who died in April in Houston.

Bush was a Navy pilot in World War II and survived being shot down over the Pacific Ocean. His two crew members perished.