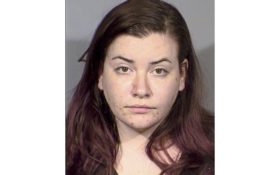 A former Maxim and Playboy Italia model and her boyfriend murdered a 71-year-old California psychiatrist in Las Vegas, according to a former roommate whose cooperation with prosecutors could get her probation in the case.

Diana Nicole Pena pleaded guilty Tuesday to accessory to murder after the slaying, reduced from a murder charge.

She told a judge she knew at the time that her former housemates, Kelsey Turner and Jon Kennison, killed Dr. Thomas Burchard.

Details were submitted under seal, with Turner and Kennison due in court Thursday on murder and conspiracy charges. Their attorneys say they’ll plead not guilty.

Turner and Kennison are accused of bludgeoning Burchard and leaving his body in the trunk of Turner’s car found March 7 in the desert outside Las Vegas.

Police say Burchard, who lived in Salinas, California, had an intimate relationship with Turner and paid rent on a Las Vegas home where Turner, Kennison and Pena lived.

Police found blood, footprints, cleaning supplies and items bearing Kennison’s name in the house and garage, and towels that matched one found with Burchard’s body.

Pena’s attorney, Jess Matsuda, says the 31-year-old Pena had nothing to do with Burchard’s death.